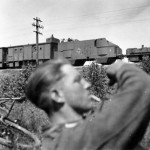 German and captured armored trains in World War II.
At the beginning of the 1930s it was known that the end of armoured trains was coming. It was caused by development of artillery, especially of improvement of its accuracy, and dynamic development of aviation. An airplane became “a killer” of an armoured train not only because the train which could not maneuver was a big and thereby easy target but also because airplane was able to destroy tracks and railway junctions so that to paralyze rail traffic for a long time. The armoured train completely lost his battle with planes and its tasks were taken over by armoured cars and a self-propelled guns. Despite those changes which were happening at the moment of outbreak of World War II armoured trains were in arsenals of many armies including German one. Germans being aware of the lack of armoured trains limited their tasks to actions clearly defensive such as defense against other trains, supervising railway tracks, anti-partisan operations, defense of railway stations and transports, limited artillery support of armies and reconnaissance. Most of German armoured trains were improvised and to a great extent captured Czechoslovakian, Polish or Soviet trains were used.

This website uses cookies to improve your experience while you navigate through the website. Out of these, the cookies that are categorized as necessary are stored on your browser as they are essential for the working of basic functionalities of the website. We also use third-party cookies that help us analyze and understand how you use this website. These cookies will be stored in your browser only with your consent. You also have the option to opt-out of these cookies. But opting out of some of these cookies may affect your browsing experience.
Necessary Always Enabled

Any cookies that may not be particularly necessary for the website to function and is used specifically to collect user personal data via analytics, ads, other embedded contents are termed as non-necessary cookies. It is mandatory to procure user consent prior to running these cookies on your website.