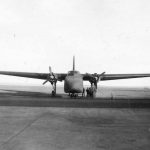 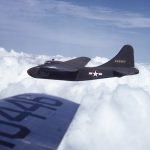 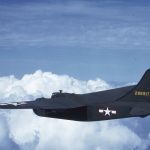 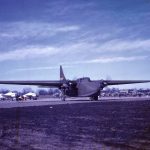 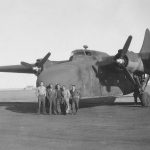 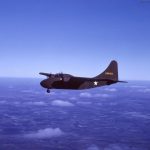 The Curtiss-Wright C-76 Caravan is an American transport aircraft developed during the Second World War.
In 1941-42, the impending aluminium shortage threatened to curtail the production of some conventional all-aluminium military aeroplanes then
on order. With the metal allocated to high-priority tactical types, lowerpriority transports and trainers were expected to suffer. Consequently, the
government encouraged the development of new models that would use a minimum of critical materials. Curtiss responded to this requirement with the Model CW-27 Caravan, a wooden twin-engined transport that the Army designated C-76. Orders were placed with Curtiss for 200, to be built principally in the new Curtiss Louisville plant, and Higgins was to build an unspecified number in New Orleans. However, with the aluminium shortage overcome, increased
orders were placed for established all-metal transports such as the C-46, and the C-76 programme was cancelled after 25 aeroplanes had been built.

The C-76 made its first flight at St. Louis on January 8, 1943. It was found to be unbalanced when empty. Ballast had to be added to establish proper balance. However, with this ballast, when loaded, the aircraft became uncontrollable when the flaps and landing gear were extended. There were other problems that led to the C-76’s failure: the elevator would flap at the slightest gust of wind and during the climb to design power, the entire aircraft would vibrate. The wing was not strong enough. During static testing at Wright Field, it failed at 40% of the calculated load factor.
The US Army Air Force was very upset and asked Curtiss to take immediate action. Bob Fausel, who flew the C-76, recalls that with him, disaster was always to be expected.
In some areas, the aircraft exceeded specifications. Cruising speed and maximum speed exceeded them by 5%, and the range was greater than expected, but with a fuel overload. In an attempt to remedy the aircraft’s shortcomings, a new empennage, with dihedral, was adopted. The fuselage was reinforced by a ridge running from the cockpit to the vertical stabilizer. The wings were raised with a 9-degree deflection. However, these modifications did not solve all the problems.
On May 3, 1943, the first plane built in Louisville made its first flight. On the following Saturday, it participated in flight demonstrations at an open house at Standiford Field. On Monday, May 10, tragedy struck. The plane lost its tail and crashed at Bowman Field, killing all three crew members: pilot Edward Schubiner, co-pilot John Trowbridge and flight engineer Robert Scudder. The investigation revealed that the front spar attachment bolts had been forgotten by the workers during assembly. The elevator had been retained only by the glue.
Without hesitation, the army cancelled the contract in August 1943. 19 aircraft had been completed. At the beginning of September 1943, all the remaining C-76s were banned from flying, and dispersed to various centres for ground training.

This website uses cookies to improve your experience while you navigate through the website. Out of these, the cookies that are categorized as necessary are stored on your browser as they are essential for the working of basic functionalities of the website. We also use third-party cookies that help us analyze and understand how you use this website. These cookies will be stored in your browser only with your consent. You also have the option to opt-out of these cookies. But opting out of some of these cookies may affect your browsing experience.
Necessary Always Enabled

Any cookies that may not be particularly necessary for the website to function and is used specifically to collect user personal data via analytics, ads, other embedded contents are termed as non-necessary cookies. It is mandatory to procure user consent prior to running these cookies on your website.