Marines and Jeeps Advance to Front Lines on Saipan

Troops Use Ox Cart to Carry Supplies to Front on Saipan

Saipan US reinforcements and landing crafts

Marines Resting in Foxhole after Battle on Saipan

Marines round up civilians on Saipan 1944

Marines Lead Japanese Women and Children to Safety on Saipan

US Soldiers Buried at Sea during 3rd Day of Saipan Invasion

Marines In Action On Saipan 1944 Pto

US Tanks Battle of Saipan June 1944

Beachead Saipan 1944, LVT in the background

US Troops LCM Bulldozers and Trucks on Saipan Beach

Soldiers Relaxing after Capture of Saipan

US Troops by Knocked Out Japanese A6M5 Zero on Saipan

US troops Battle of Saipan June 1944

Marines Head toward Shore for Initial Landing on Saipan 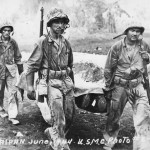 Battle of Saipan 15 June 1944 – 9 July 1944.
The Battle of Saipan was a battle of the Pacific campaign of World War Two, fought on the island of Saipan in the Mariana Islands from 15 June until 9 July 1944. The Allied invasion fleet embarking the expeditionary forces left Pearl Harbor on 5 June 1944, the day before Operation “Overlord” in Europe was launched. The USMC 2nd Marine Division, 4th Marine Division, and US Army 27th Infantry Division, commanded by Lieutenant General Holland Smith, defeated the 43rd Division of the Imperial Japanese Army, commanded by Lieutenant General Yoshitsugu Saito.