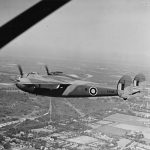 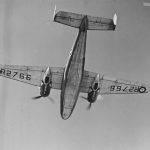 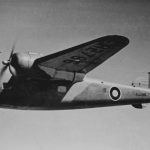 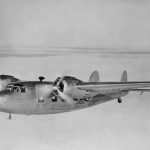 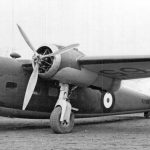 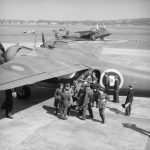 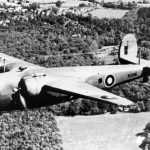 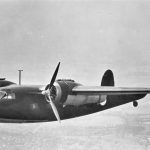 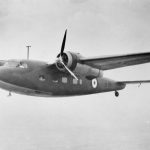 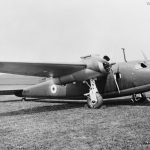 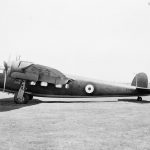 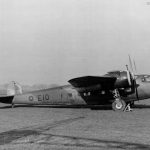 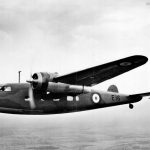 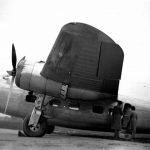 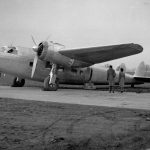 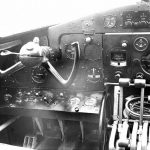 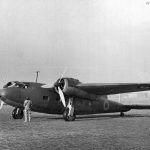 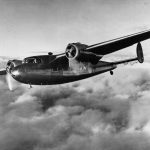 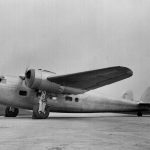 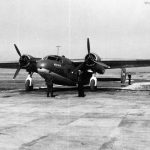 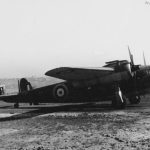 The Flamingo was a high-wing cantilever monoplane powered by two 890 h.p. Bristol Perseus XIIC sleeve valve radiais and equipped with such up to date refinements as D.H. hydromatic three bladed airscrews, split trailing edge flaps, hydraulically retractable undercarriage and a low slung fuselage affording the ease of entry and loading necessary for short haul work. Passenger accommodation varied between 12 and 17 according to the range while the normal crew comprised Captain, First Officer and radio operator. Prototype trials commenced at Hatfield with the first flight of the unmarked prototype on December 22, 1938 piloted by Geoffrey de Havilland Jr. and George Gibbins, and included the temporary fitment of a third, central, fin. This was removed when enlarged fins with horn balanced rudders of greater area were fitted. Following the success of the first test flights, Jersey Airways ordered three aircraft in 17-seat configuration, and the Egyptian government and the British Air Ministry also placed orders. The Air Ministry aircraft were to be used by the Air Council (RAF leadership) and the King’s Flight (in charge of transporting the Royal Family).

The 12-seat prototype was delivered to Jersey Airways in May 1939 for a two-month evaluation period. Its first commercial flights carried only mail, but from July onwards passenger flights were operated on weekends. In October 1939, the prototype was purchased by the Air Concil and delivered to No. 24 Squadron RAF as T5357 where it was used until it was lost in an accident in October 1940.
The second aircraft G-AFUF was to be the first for Guernsey and Jersey Airlines but was requisitioned for the RAF and delivered to No. 24 Squadron as X9317, and the other two on order were never built following the outbreak of World War II.
The King’s Flight aircraft was to be used in the event that the Royal Family had to leave the country, but was eventually transferred to No. 24 Squadron for liaison and communication missions.

In early 1940, the British Overseas Airways Corporation (BOAC) ordered eight aircraft to be powered by Bristol Perseus XVIs and originally equipped with ten seats. The first BOAC aircraft was delivered to Whitchurch Airport (Bristol) on 5 September 1940. The second aircraft was requisitioned by the Air Ministry and assigned to the Admiralty where it served at RNAS Donibristle. To replace the requisitioned aircraft, BOAC later received the aircraft destined for the Egyptian government. After a training period all BOAC Flamingos were sent to Cairo for use in the Middle East. The BOAC aircraft were named after a king of England and were designated K-class by the airline. BOAC’s Flamingo’s had a bad reputation and after three accidents, one of which was fatal, and due to a lack of spare parts, the company decided to retire them. In 1943, the five remaining airworthy aircraft were sent back to the UK. They were not returned to service and were scrapped in the early 1950s.

The majority of RAF aircraft were withdrawn from service during the war and were scrapped as they were needed to provide spare parts for the remaining aircraft. The Admiralty aircraft was to be withdrawn from service and scrapped, but in August 1944 it turned over at Gatwick Airport and was abandoned there. In 1946, the aircraft was bought by Southern Aircraft and rebuilt with parts from BOAC. It was revived in 1947 and delivered to British Air Transport at Redhill airfield. Receiving its certificate of airworthiness, it flew charter flights until it was temporarily withdrawn from service in 1949. British Air Transport also considered restoring three BOAC aircraft, but the project was abandoned even when the aircraft were well underway. In 1952 British Air Transport restored the Admiralty aircraft which flew again on May 27, 1952. The Redhill airfield was closed in 1954 and the last flying Flamingo was dismantled and scrapped.